I'm always working on trying to "clean up" my bike, in an aero sense.  I put my main hydration bottle between arms on my aero bar.  I've never raced with a second water bottle, even at Augusta 70.3 last year.  But this year, with Las Vegas looming, I knew I needed a second bottle.  I also wanted to keep it off the seat tube.

So the logical place for a second bottle is behind the seat.  I have my flat kit bag located back there, but I knew there were better options for that.  Enter the Dark Speed Works Speedpack 483.  This particular model is designed to attach to the top tube alone.  Because of the cable routing on my B16, it isn't really viable to use the stem to hold any sort of pack on.  This pack specifically designed to mount without using the stem or steerer tube.

So for Father's Day I was able to finagle an order from Dark Speed Works.  It took about 10 days to ship so I got it just after Fathers Day 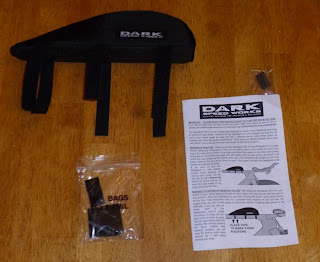 The package came with the pack, velcro stickers, some shrink tube for the zippers, and somewhat lengthy instructions.


The pack has 3 straps and the general idea is that you wrap the straps around the top tube to hold the pack on.  However, in order to make sure it doesn't go anywhere you also put 3 stickers with velcro on the bottom on the tube so It can't slide anywhere.  These stickers attach somewhat permanently so quite a bit of the instructions help you place them in the right spot.

I got 3 extra velcro stickers.  You would need them if you wanted to put the pack on another bike.  I just got them just in case. 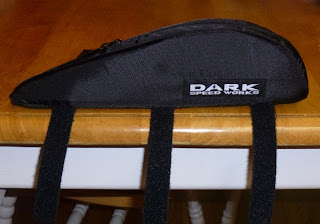 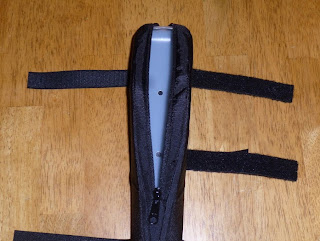 I first put the pack on without the stickers and rode it without anything in it just to get the feel of it.  The wrap around straps rubbed my legs quite a bit at first.  Then I trimmed back the straps so there wasn't any excess and that helped a lot. 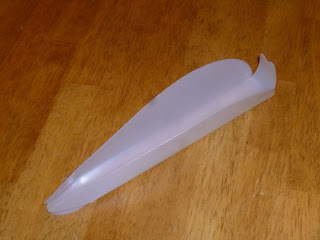 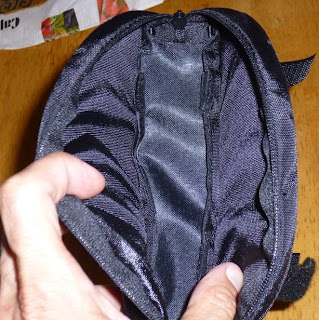 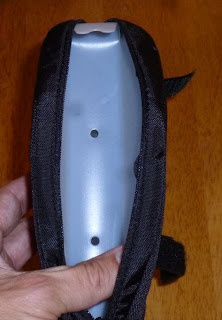 The pack also comes with a plastic insert.  This helps with the rigidity of the pack.  I think It's a good idea, especially since I will be stuffing CO2 cartridges and tools in there for my flat kit.

So here is the initial look on Green Lightning.  My legs don't hit it except for every once in a while.  It is definitely something I have had to get used to when stopping and unclipping as there isn't much room between the pack and my seat.  I was just barely able to fit everything in there that I had in my old pack.  For some reason I thought it would have more storage space.  I was hoping to get everything in there and more.  But it serves it's purpose as a flat kit and frees up my seat for a bottle mount. 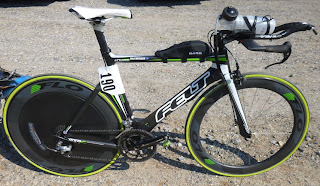 This is after my first race with the pack. I don't even notice it any more which is good.  Overall I'm very pleased.  It took a little longer to get it all mounted on there, but once it is done, it is pretty seamless.  I was hoping for more storage space, but looking at it now, I wouldn't want the pack and longer and wider (maybe higher?).  Now I just need to rig up a water bottle holder behind my seat and I will be ready for Vegas!