When I got my bike back in January of 2011, I didn't own any pedals.  Or shoes for that matter.  I had gotten a pair of Speedplay X Series from my (now ex) brother in law.  So I had kinda gotten used to the Speedplays and became pretty comfortable in them.  I like clipping in without having to look down.  I also like the float.  I don't know how many miles they had on them when I started, but I put over 9,000 miles on them myself before I started having problems with them.

At first I heard the right one start making a clicking sound like it wanted to unclip while I was riding.  It never did.  I tried more grease, but it didn't help.  Then when I had my bike in the shop to get my new aero bars on, they told me the right pedal's bearing was shot and that I needed new ones.  They gave me a price but I decided to get them online (I can't buy everything there!)


I decided to get the Speedplay Zero Stainless Steel Limited Edition Team Green.  They seemed to go pretty well with Green Lightning.  I ordered from Competitive Cyclist.  I literally had a tracking number in 4 hours.  They were on there way quickly enough, but they came from Utah, so it took a few days. 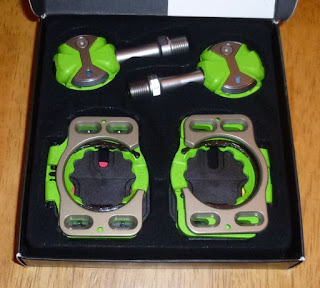 The packaging was pretty nice.  The instructions seemed pretty thorough, although I really didn't need them.  They came with cleats as the Zeros are not compatible with the X series.  That's ok as they recommend new cleats every year anyway.  I got them on pretty quickly because I already had the formed spacers on my shoes from the X series underneath my base plate extender. The extender plate fits the Zero cleats, so I just had to screw them on.  I use the extender to move the cleats further back on my feet to help alleviate toe numbness. 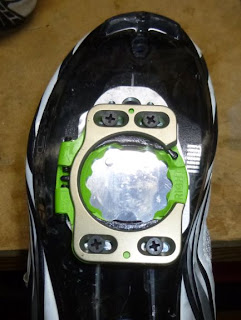 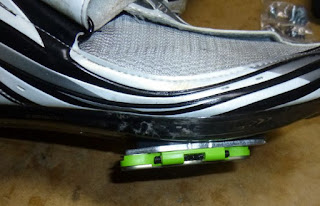 The nice thing about installing pedals is that they quite possibly may be the easiest thing to install on your steed.  They looked great on Green Lightning.  I also ordered some of the cleat lubricant to help keep everything working well. 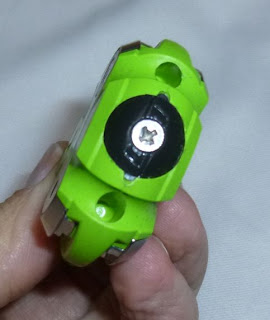 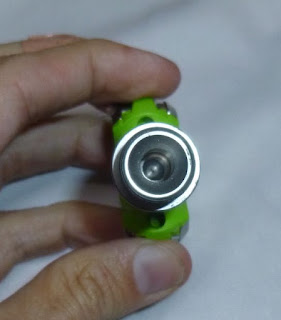 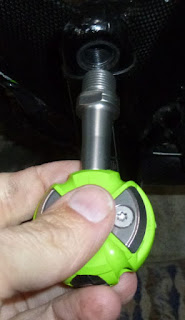 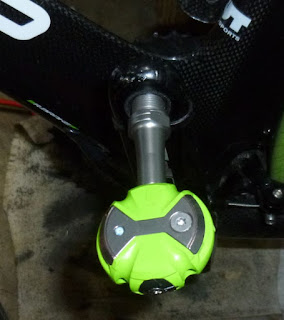 When I first tried them out there were really hard to get clipped in.  I mean really hard.  A bit stiff out of the box as you might say.  However, on my first ride, I could hardly believe how smooth they were.  I guess its one of those things that you don't really know how bad something has gotten (the old pedals) until you replace them.  They felt just awesome. 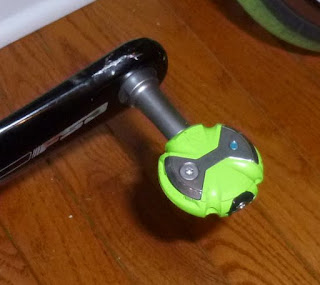 Slowly but surely they have become easier to clip in.  It has taken quite a few rides, but they clip in pretty easily now.  The float is adjustable, and I have it set to float as much as possible without my shoes hitting the frame.  I really like the float of the pedals, as my knees continue to thank me.

All in all I couldn't be happier.  I'm glad I got the stainless as it wasn't that much more, as opposed to the titanium, which are a LOT more.  Green Lightning just got a little bit faster.
Posted by Runner Rick at 5:17 AM

New comments are not allowed.